Kingsman: The Blue Blood
The King's Man is a prequel of the Kingsman movie franchise. It was released on December 22nd 2021.[2]

As a collection of history’s worst tyrants and criminal masterminds gather to plot a war to wipe out millions, one man must race against time to stop them. Discover the origins of the very first independent intelligence agency in The King's Man.

In 1902, British aristocrat Orlando, Duke of Oxford, his wife Emily, and their young son Conrad visit a concentration camp in South Africa during the Second Boer War while working for the Red Cross. Emily is killed during a Boer sniper attack on the camp, causing pacifistic Orlando to determine that the world needs someone to head off such conflicts before they occur.

Twelve years later, Orlando has recruited two of his servants, Shola and Polly, into his spy network dedicated to protecting the United Kingdom and the British Empire from the approaching Great War. Conrad, eager to fight, is forbidden to join up by the protective Orlando, who persuades Lord Kitchener, Secretary of State for War, not to let him join the army.

At the behest of Kitchener, Conrad and Orlando ride with Orlando's friend Archduke Franz Ferdinand through Sarajevo, and Conrad saves the Archduke from a bomb thrown by Gavrilo Princip, a rebel intent on sparking a war. Later, however, Princip happens to run into the Archduke's entourage again, this time succeeding in fatally shooting the Archduke and his wife Sophie. Orlando's group, relying on information from other dignitaries' socially invisible servants, learn that Princip was part of a plot to pit the German, Russian, and British empires against each other. The group, headed by the mysterious Shepherd from a secret mountain-top headquarters, have their own network of agents, including the Russian mystic Grigori Rasputin, a trusted adviser to Tsar Nicholas of Russia.

Rasputin, on the orders of the Shepherd, manipulates Tsar Nicholas by poisoning his young son Alexei, and only curing him when Nicholas promises to leave the war. Conrad is notified of Rasputin's manipulation by his cousin, Prince Felix Yusupov. Knowing the Western Front will be left vulnerable if Russia leaves the war, Conrad delivers this information to Kitchener and his aide-de-camp Major Morton, who set sail for Russia. Their ship is torpedoed by a submarine and sunk. Word of Kitchener's death reaches Orlando, spurring him to head to Russia with Shola, Polly, and Conrad to deal with Rasputin once and for all. At a Christmas party hosted by Prince Yusupov, Orlando, Shola, Conrad, and Rasputin fight, the skirmish only ending when Polly shoots and kills Rasputin.

At the Shepherd's orders, Erik Jan Hanussen, an adviser to Kaiser Wilhelm II, sends the Zimmermann Telegram, hoping to distract Britain and the United States. Although the message is intercepted by British intelligence and given to the United States, President Woodrow Wilson refuses to join the war without concrete proof. The Shepherd recruits Vladimir Lenin and orders his Bolsheviks to overthrow the Tsar and remove Russia from the war, sending an assassin to kill the Romanovs.

Now of age, Conrad is commissioned into the Grenadier Guards against his father's wishes. Orlando meets with King George V, who summons Conrad back to Britain. Conrad sends back a young soldier named Lance Corporal Archie Reid in his place, giving him the codename "Lancelot" to send a message to his father. Disguised as Archie, a member of the Black Watch, Conrad volunteers for a mission into No-Man's Land to retrieve information from a British agent wounded there, but is mistaken for a German spy upon his return and executed at gunpoint. However, the information he retrieved from the spy is the proof President Wilson required to enter the war.

Orlando's group learn President Wilson is being blackmailed with a film of him being seduced by one of the Shepherd's agents, Mata Hari. Orlando locates her at the American embassy and after overpowering her recovers her cashmere scarf, made from rare wool only found in one specific mountainous region. Correctly identifying this location as the Shepherd's base of operations, Orlando, Shola, and Polly head there and fight their way inside. Morton, who had faked his own death and sunk the battleship, is revealed to be the Shepherd. Orlando and Shola fight and kill Morton while Polly recovers the original film negative of Wilson's seduction, allowing his country's forces to mobilise.

A year after the war, Orlando purchases the Kingsman Tailor Shop as a front for his organisation. Orlando, Shola, Polly, King George, Archie Reid, and a U.S. Ambassador form the original Kingsman, each assuming a codename from the King Arthur legend to honour Conrad. In a mid-credit scene, Hanussen is revealed to have taken on the Shepherd identity, and introduces Vladimir Lenin to the Romanovs' killer: a young Adolf Hitler.

The King’s Man - Look for it on Digital & Blu-ray 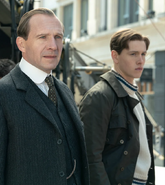 In June 2018, Matthew Vaughn announced that a prequel film titled Kingsman: The Great Game was in active development, stating that the plot would take place during the early 1900s and would depict the formation of the spy agency and that the project would film back-to-back with "the third regular Kingsman film" which was scheduled to be released in 2021.[3]

Principal photography began January 22, 2019 in the United Kingdom.[11] In April 2019, some scenes were shot in Turin and in two palaces close to it, the Palace of Venaria and Stupinigi in Italy.[12] The film's initial cinematographer Ben Davis had to depart the project during reshoots due to his commitments to Eternals.[13]

Matthew Margeson, who worked with Henry Jackman in the previous Kingsman films, composed the film score with Dominic Lewis. Hollywood Records released the soundtrack digitally on 22 December 2021.[27] The ending theme is "Measure of a Man" by FKA Twigs featuring Central Cee.[28]

As of 15 February 2022, The King's Man has grossed $36.9 million in the US and Canada, and $87.1 million in other territories, for a worldwide total $124 million. In the US and Canada, The King's Man was released alongside Sing 2 and The Matrix Resurrections. It was originally projected to gross $15–20 million from 3,175 screens over its first five days of release.[29] It went on to under-perform, grossing $5.9 million in its opening weekend and an estimated $10 million over the five days, finishing fifth at the box office, with contributing factors such as the reluctance to go to cinemas during the pandemic, the rise of the Omicron variant of COVID and being released during the second weekend of Spider-Man: No Way Home. Men made up 65% of the audience during its opening, with those in the age range of 18–34 comprising 54% of ticket sales and those above 35 comprising 40%.[30]

The review aggregator website Rotten Tomatoes reported an approval rating of 43% based on 167 reviews, with an average rating of 5.1/10. The site's critical consensus reads, "Ralph Fiennes' solid central performance in The King's Man is done dirty by this tonally confused prequel's descent into action thriller tedium". On Metacritic, the film has a weighted average score of 44 out of 100, based on 40 critics, indicating "mixed or average reviews". Audiences polled by CinemaScore gave the film an average grade of "B+" on an A+ to F scale, while PostTrak reported 77% of audience members gave it a positive score, with 60% saying they would definitely recommend it. Steve Pulaski of Influx Magazine gave the film a "C-" letter-grade, calling it "the most ungentlemanly Kingsman movie yet."[32][33]

The King's Man began its For Your Consideration campaign in January 2022, hoping to obtain a nomination for Ben Davis for the Best Cinematography category.[34]

Matthew Vaughn stated that if a sequel were to be developed he would like to see the story about the first decade of the Kingsman agency with all characters that audience see at the end. According to the Hollywood Reporter, he said:

It's more if the public demands it. So the second The King's Man is nearly ready to go. Seeing Ralph [Fiennes] and Aaron [Taylor-Johnson] on a mission together with Polly (Gemma Arterton) and Shola (Djimon Hounsou)? I'm in! Those four together? Let's go! I think it would be great.[35]

Community content is available under CC-BY-SA unless otherwise noted.
Advertisement