Kingsman: The Golden Circle
Roxanne "Roxy" Morton was a Kingsman agent by the codename of Lancelot. She was recruited for Kingsman by agent Percival. She is one of the protagonists in the film Kingsman: The Secret Service. Little is known about Roxy's background, although it is evident she came from a fairly well-to-do family. Roxy is close friends with Gary "Eggsy" Unwin. She is portrayed by Sophie Cookson.

Roxanne "Roxy" Morton was born on September 22, 1992 to a reasonably wealthy family in England. Very little is known about her childhood, though a military background has been implied. It is evident that Roxy has a profound fear of heights, which she referenced may have been founded by having jumped from a aeroplane sometime earlier in her life.

Roxy was recruited by the Kingsman agent Percival to compete for the open position of Lancelot. She was one of only two girls chosen. She also befriended Eggsy Unwin during her recruitment. When the cadets were instructed to pick a dog, she picked a poodle. Eggsy sniggered at this, but she retorted back by telling him poodles were the oldest-working breed of gun-dog.

Upon arrival at the candidates' living quarters, Roxy was the first to approach Eggsy and introduce herself, reassuring him that the overwhelmingly grim instructions were simply scare tactics and advising him to simply ignore the jeers of the other snobbish recruits. She was one of the three candidates who took life preserving action when the dorm was rapidly flooded later that night and appeared shaken when it was revealed that their lack of teamwork cost the life of one of the candidates.

Though visibly frightened and ultimately requiring Eggsy's assistance during an exercise involving jumping from a plane and one by one discovering which person was not equipped with a parachute, Roxy was seen to excel throughout the different tests that took place over the months, landing her in the top three where she and Eggsy move past rival Charlie Hesketh in a simulation designed to test their loyalty to the agency via being tied to train tracks with freedom offered in exchange for information on their mentors. In the end, her willingness to shoot her dog when instructed to do so won her the title of Lancelot.

Roxy is seen at the headquarters with former trainer Merlin when Eggsy traveled back to show them the late Arthur's phone, pointing a gun at him and only lowering it when Merlin reassured her of his intentions. Realising they would be unable to trust any other agents and would need to take matters into their own hands, Merlin equipped her with a mechanism strapped to two high-altitude balloons that she would use to float into the stratosphere in order to disrupt Valentine's impending broadcast by destroying one of his satellites, while Eggsy and Merlin infiltrated Valentine’s mountain bunker complex in northern Siberia. Roxy shot down the satellite, but Valentine persuaded a business contact to replace it and activated the signal, causing mayhem worldwide. Having landed safely back on earth, Roxy was instructed by Eggsy to call his mum and tell her to lock herself away from Dean and the baby. She was last seen celebrating over the phone after Eggsy secured Valentine's demise, and Merlin congratulated the two of them.

Since the events of the last film, Roxy had become a full agent, and had taken up residence at the Kingsman Headquarters.

In an attempt to impress Princess Tilde's parents over dinner, Eggsy had Roxy feed him information on sophisticated topics (via ear-piece and glasses) whilst she discussed what research she had done on the Golden Circle. Eggsy sent a message reading "ur da best" and when queried whether he meant best agent or best friend, he replied that Roxy was both, to which she simply smiles.

After Charlie's Cybernetic Arm hacked the Kingsman network, the Golden Circle launched ICBMs on all Kingsman residences and locations in an effort to exterminate them, including the Kingsman Headquarters which she was residing in. Alerted of the missile's approach, Roxy was last seen darting out of bed before the mansion explodes and crumbled into the underground bunker.

Shortly after Roxy's death, Eggsy and Merlin made a toast to honour her, along with JB, Arthur and the other eight fallen Kingsman agents. Towards the end of The Golden Circle, Eggsy killed Charlie, saying that he was doing it for Roxy and everyone else that had been killed by the ICBMs. 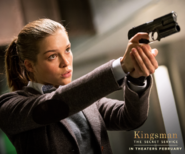 Add a photo to this gallery
Retrieved from "https://kingsman.fandom.com/wiki/Roxanne_%22Roxy%22_Morton?oldid=9691"
Community content is available under CC-BY-SA unless otherwise noted.