The topic of this page has a wiki of its own: Kingsman The Golden Circle Game Wiki.

Kingsman: The Golden Circle (mobile game) was released on 14 September 2017. The game also includes characters from Kingsman: The Secret Service. Unlike the films, the game does not have graphic violence or explicit language, but it is classified a "12+" rating for "mild realistic violence". In the days before the film's release, another mobile game based on the Kingsman franchise, simply titled Kingsman: The Secret Service, was announced to be in development also for iOS and Android, by American mobile game developer YesGnome. The game is a hybrid action adventure-construction simulator, where players construct impregnable secret bases, similar to Fallout Shelter, while infiltrating enemy bases in run-and-gun missions based on the plot of at least the first film.The Android version is currently in early access. Both games are free-to-play, offer in-app purchases, and support online player-versus-player multiplayer, with the former game requiring an Internet connection to play. 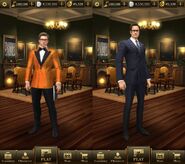 Add a photo to this gallery

Retrieved from "https://kingsman.fandom.com/wiki/Kingsman:_The_Golden_Circle_(mobile_game)?oldid=7084"
Community content is available under CC-BY-SA unless otherwise noted.