Gazelle was the personal assistant and right-hand woman to billionaire Richmond Valentine who's lower legs were replaced with blades. She served as the secondary antagonist in the 2015 action-comedy film Kingsman: The Secret Service and a flashback antagonist in the 2017 film Kingsman: The Golden Circle. She was portrayed by French-Algerian dancer, model and actress Sofia Boutella.

Gazelle is the assistant and right-hand of Richmond Valentine, and she helps him in every way in his plans to eradicate mankind (which he deems as a virus to the world) using special SIM cards developed by his company that makes people become excessively violent. When Gazelle sees that Kingsman agent Harry Hart and his apprentice Gary "Eggsy" Unwin are attempting to prevent his scheme, nothing stands in her path with her two prosthetic legs which give her superhuman strength and allows her to kill her enemies with ease.

Gazelle was first seen appearing after having killed Kingsman agent Lancelot, who had attempted to free the kidnapped Professor James Arnold. After having sliced him in half with her legs, she covered up the bodies of the numerous henchmen the deceased agent had killed before meeting his demise while Professor Arnold held the sheets she wasn't needing yet and Richmond Valentine waited beyond the front door, not having the stomach for blood.

Gazelle later served dinner when Harry Hart, having recovered from a coma he incurred while investigating Professor Arnold, posed as billionaire "Mr. De Vere", trying to gather information on Valentine's plans. She served them McDonalds along with some wine, which had a tracer substance added to it in Hart's glass. This led them to the Kingsman tailor shop in London, where they met again as Valentine had a suit made for himself. It was also Gazelle's first encounter with Gary "Eggsy" Unwin.

At Hart's recommendation while still posing as the billionaire, Valentine bought a top hat to match his suit, unaware that it had been bugged. This led them to be tracked down to Kentucky by the Kingsman.

Following them to the United States, Hart tracked them down to an obscure hate group church, where they were nowhere in sight. In truth, they were several miles away from the church, testing a signal broadcasted through Valentine's SIM cards. Activating them, it caused everyone in the church, Hart included, to go berserk and start attack each other. After Hart killed the last of the churchgoers, he exited the church where he met face to face with Gazelle and Valentine, accompanied with two gunmen. After Valentine revealed his plan to Hart, Gazelle asked if he would like to kill him and gave him a gun, after which Valetine shot Hart in the head, killing him.

Eggsy soon learns of Valentine's plan after killing his mentor Chester King for being in league with Valentine. As such, he, Roxy Morton and Merlin head to Valentine's mountain base to stop Valentine from executing his plan. Roxy will pilot a twin balloon vehicle in order to destroy Valentine's satellite with a missile, while Eggsy and Merlin will stop Valentine. During the raid, Eggsy is pinned down by enemy gunfire in front of one of the prison cells housing the kidnapped VIPs, and Merlin triggers the implanted devices, causing them to explode, killing all of the VIPs who were part of Valentine's plan.

Confronting Valentine, Eggsy is attacked by Gazelle, and the two engage in a climactic fight. Eggsy struggled against Gazelle's fast movements and dangerous blades, and after a while of fighting is knocked down. Getting up, they ran at each other and jumped, and in mid-air he activated his Kingsman shoe blade, scratching her with the poisoned blade. In a matter of seconds the poison started acting, causing her skin to become green and bubbly and then stops her from breathing, killing her instantly. He then grabs one of her prosthetic legs and uses it to kill Valentine.

Gazelle is momentarily seen when the Statesman agents explain how they found Harry.

Gazelle was very relaxed, calm and easygoing by nature, never losing her temper. She appears to cling on to Valentine in a similar way that Oddjob clings to Goldfinger: however, unlike Oddjob, Gazelle actually speaks and appears to have a genuine personality. She is very intelligent when it comes to strategy, and appears to be capable of questioning the authority and ideas of her boss. She is extremely loyal to Valentine, and will literally risk her life for his safety.

She carries out his orders mostly without question, and will kill any who dares threaten him: she throws herself upon him when Eggsy shoots at them, and moments later throws herself at the boy to fight him. In combat, she was incredibly powerful, dangerous and confident, the ultimate opponent for even the most hardened of Kingsman agents - ironically, in combat is the only time she shows anything close to frustration.

Gazelle was a very skilled fighter, being able to take down multiple guards. She was trained very well with her leg-blades, being able to slice someone in half vertically. Her weakness seemed to be her arrogance, thinking she could kill Eggsy while jumping at him fully unprotected, which resulted in her death. 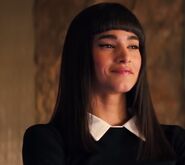 Add a photo to this gallery

Retrieved from "https://kingsman.fandom.com/wiki/Gazelle?oldid=9861"
Community content is available under CC-BY-SA unless otherwise noted.